At the behest of my grandmother, specifically designed to thwart my father’s attempts to get me to live with him instead of them, I moved back in with my mum. With zero knowledge of that, from where I stood it was the right decision to make: nearly two years living in whatever toxic rehabilitation camp for perfectly normal children my grandparents were trying to run was long enough.

By early 1993, Mum and Lauren and Thomas (and yes, Dale) had moved on from Townsville and were living in Darwin. Moving that far was a giant, scary move for a twelve year old to make alone…

…and so Robby came to my rescue! Again!

Robby had decided that she would move to Darwin too. She was even going to live with us again. So Robby came up to Tin Can Bay to collect me, took me on the train down to Brisbane, looked after me for a few days, and then accompanied me on the flight all the way to Darwin. With Robby by my side, I didn’t feel anxious even once. Except, maybe, for that first moment we stepped out of the air conditioning of Darwin Airport into the actual Darwin climate, and felt the heat for the first time.

I make fun, but to be honest, I loved Darwin, and I still do now. It is an amazing place and I had such an incredible time living there. No gags here, no irony, I highly recommend Darwin. Especially Nightcliff, which is not only the loveliest part of town, but also has the loveliest name. 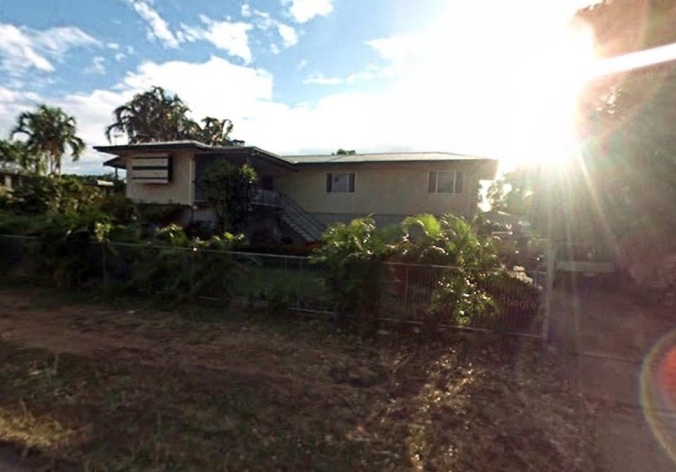 Shout-out to the Google Street View van, who took this photo at the right time of day to really drive home the point that Darwin is quite hot. Look at that sun! Right in your eyes!

By the time I had moved back in with my original family, I had aged by two years, and so had they. My baby brother had gone from an actual baby to a walking, talking three year old, and my sister had grown into a school-aged six-year-old, and had almost entirely forgotten about me. She knew who I was, but her grasp of how I fit into our family had gotten shaky.

As a result, she would continually refer to our mother as “my mum”, which ruined me every single time. On more than one occasion I would scream-cry at her “SHE’S MY MUM TOO” and then she’d scream in response (because my sister has a rule that no scream anywhere should ever be lonely) and we’d both scream until we got in trouble.

She got out of the habit of saying “my mum” around the same time I stopped caring about it, so that sibling battle was a nil-all draw.

One of the benefits of being older was that I was considered responsible: responsible enough to babysit my brother and sister when mum and Robby went out for a girls night, which happened like once a quarter. It might not sound like a lot, but it technically means she partied harder at 33 with a shitbag partner and three kids than I do now, at the same age, completely single and dependent-free.

And anyway, it would have happened more than once a quarter, only we were all so very poor. How poor were we? So poor that when mum and Robby decided they wanted to spend their evenings playing Yahtzee, they couldn’t afford to buy the game Yahtzee. So instead they bought five dice for thirty cents, an exercise book for 49 cents, and red, blue and black pens for like a dollar each. They ruled up the scorecards and instructions in the exercise book, and used a pillowcase (which they decorated with the same pens) as a game mat, to muffle the sound of the dice. Mum and Robby essentially MacGyvered a board game.

But, on the nights when Mum and Robby put down the dice for a night out on the town, it was a night of blissful freedom for them, but also for me: once Lauren, Thomas and Robby’s daughter Taren were in bed, the world was my oyster, by which I mean the TV remote was mine. I resented not getting paid for the gig, but I enjoyed the autonomy.

On one of these quarterly occasions, while mum was still getting ready, I decided that once the TV was in my control I would watch Police Academy 3.

Why did I want to watch it? Why was there a VHS copy of Police Academy 3 in our house? These are mysteries to which we may never have answers. But what I CAN tell you is I faced a big hurdle:

Police Academy 3 was rated ‘M’, for audiences 15 years and over.

If you hadn’t worked out already: I was, am, and always have been, a massive—MASSIVE—goody two shoes. I will follow every instruction given to me, up to and including videotape labels. Remember: this is the person who once sat on a still alive shark because he was told to. I did what I was told, when I was told, and I was probably insufferable because of it.

So I had to ask permission.

Me: Mum, can I watch Police Academy 3 tonight?
Mum: It’s rated M.
Me: I know, but will you let me watch it?
Mum: You can’t, it’s not for children.
Me: But I’m mature!
Mum: It says you can’t.
Me: Why not?
Mum: Because it says you can’t.
Me: But you’re more the boss of me than the videotape!
Mum: Classifications are there for a reason.
Me: But muuuuuuuuuum.
Mum: I don’t make the rules.
Me: This is so unfair. You are happy to leave the lives of your OTHER TWO CHILDREN in my care. You think I’m mature enough to HANDLE HUMAN LIFE. But you won’t let me watch a stupid movie! I’ve SEEN M rated movies before, MUM.
Mum: Well you can’t watch this one.
Me: MUM.
Mum: My hands are tied.
Me: This is so unfair! WHY?
Mum: We’ve been through this.
Me: MUUUUUUUUUUUUUM.

In case you hadn’t cottoned on, because I sure hadn’t, mum didn’t actually mind, she was simply getting some amusement from my insufferable goodness. My mother was, when the mood struck, a Class A Shitstirrer.

Mum: What does it say on the tape?
Me: M.
Mum: And underneath that?
Me: For audiences fifteen years and over.
Mum: And how old are you?
Me: Nearly thirteen.
Mum: Is “nearly thirteen” “fifteen years and over”?
Me: No, but—
Mum: WHAT DOES IT SAY?
Me: M. But MUM.
Mum: What can I do?
Me: YOU CAN SAY I CAN WATCH IT BECAUSE YOU’RE MORE POWERFUL THAN THE VIDEO BOX.
Mum: (having finally squeezed the last drop of fun out of her trolling): OH, MY GOD. CHRISTOPHER. IF YOU HAD A BRAIN. IN. YOUR. HEAD. YOU WOULD JUST SHUT UP AND WAIT UNTIL I WAS OUT OF THE HOUSE AND THEN WATCH THE BLOODY MOVIE ANYWAY.
Me: Oh.

Then she left. And she still technically hadn’t given me permission to watch the movie. And so I didn’t.

And I still haven’t.

(Well, okay, at some point the “not watching it out of protest” became “not watching it because I just don’t want to”, but if I’m being really honest with myself, that point didn’t arrive until some time in 2011.)