On June 30, 2008 I packed everything I could fit into my Corolla, choked out a tearful goodbye to Tammy and Zak and drove to Sydney to start my new life as the Website Content Editor for a weekly magazine. It was like a dream. There had been some roughness in 2007, what with having my career trajectory vanish overnight, but I was back on track. And how! I was heading off to the big city of Sydney, with a fancy, shiny new job. It was prestigious. It had the word “editor” in the title. It involved writing and pop culture and it was everything I’d ever wanted. And it was SYDNEY. For someone who’d spent the majority of his life in rural Queensland, the very notion of Sydney was that of a mystical wonderland, seen only on the telly. And here I was moving to the very place: I may as well have been moving to Sesame Street or Sunnydale or Stars Hollow.

Once I got to Sydney, I continued to drive for another hour: to Gosford, to stay with my friend John. Okay, it wasn’t the most convenient place to be for a new Sydney life, but he was the only friend I had in the immediate vicinity that had space for me to crash, and besides: I loved Gosford, and was considering living there permanently. Having visited John many times in the past, Gosford (and, more specifically, Terrigal) had taught me to not be such a smug bastard about Queensland’s beaches. This eliminated the one thing I thought Queensland definitely had over the other states, and the subsequent shock and humiliation had given me a slight case of Stockholm Syndrome as far as Gosford was concerned. 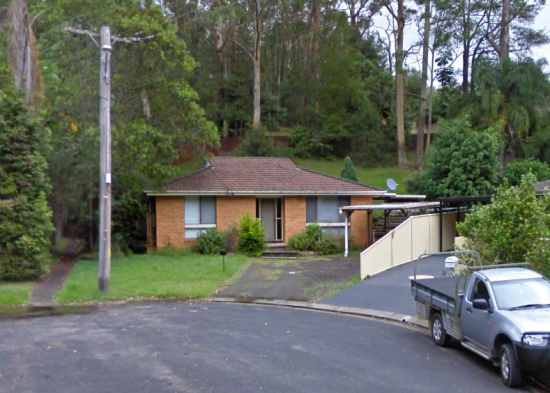 So I guess “Gosford Syndrome” is more accurate.

On July 1, 2008 I woke up at 6am to start my new life. It was a 90 minute commute on the train from Gosford, so an early start was necessary. I still ended up late, however: the train was delayed for a not insignificant amount of time due to someone in the next carriage dying. Barely 12 hours in and Sydney was turning out to be more Sunnydale than Stars Hollow.

Turns out that death-induced delay was the highlight of the day (though probably not for the dead person). I’ve mentioned the second-worst job I’ve ever had? This magazine was the worst. job. I’ve ever. had.

Have you ever seen a sitcom or a comedy sketch set inside a weekly gossip magazine? It was exactly like that. I worked with a dozen or so people so full of angst and bitterness, they were like caricatures. And the one connection I had with the magazine, the contact I knew (and adored), actually worked out of Melbourne. This office was made up entirely of strangers. Mean, horrible strangers.

The office had no internal communications system at all. No team meeting. No group discussions. I had to explain to every staff member I met who I was and why I was there (so also, maybe, their security was a bit shit?). One woman thought I was there for work experience. “Where have you come from again?” Canberra. “Oh? I didn’t realise you could go so far away. And how long are you here for?” Um, forever? I work here now. “Lovely!”

Turns out this was a job that didn’t really exist before me: all the online content was handled in a rudimentary manner by the company that ran the website. The staff at the magazine had no real idea how the website worked, and the staff at the website company had no real idea how the magazine worked. So, rather than try to learn each other’s language, they just hired someone to be the translator. I had no idea how either business worked, so perhaps I could have been perfect in the role? But I just felt panic. I spent the morning of my first day at the office of the magazine, being warned I’d learn all the online stuff from the “web dorks” off-site. I spent the afternoon of my first day at the website office, listening to a litany of complaints about the “magazine idiots”.

On July 2, 2008—my second day—one of the senior editors spent the entire day stomping about the office, shouting and screeching. No matter what she said, she said it aggressively and angrily. She bit my head off when I asked her a question, then refused to answer the question. This went on for an entire day.

The following day she made it worse by visiting each and every person she’d screamed at the day before to offer a range of bizarre non-apologies:

And so on. She had the remorseful sincerity of a drive-by shooting. And she never did answer my question.

On July 3, 2008—my third day—the magazine editor came up to me for a chat. After a little while, she said “Oh my god, I have noooo idea how your job works, you’ll have to talk me through it one day?”, which is a perfectly innocuous sentence from a coworker, but not so much from the person responsible for hiring people for the jobs. This is the person who, five weeks prior, had called me up and said “we think you’d be perfect for this position. You’ve got just the skill set we need. Move to Sydney!” I packed up my entire life, bid farewell to two of the greatest friends, coworkers and housemates that I had ever known, and shipped myself interstate on the recommendation of someone who was kind of making it up on the fly? That lunch hour, I broke down and cried. I cried at least once a day every day for the rest of that week.

That same day, I took around three hours worth of extra work with to complete once I got back to Gosford. I was going to be working all night anyway: I had been put on Jolie-watch. Angelina Jolie was due to give birth to her twins at any second, but the magazine went to print on Wednesday night. So it was my job, that night, to refresh Google every few minutes, looking for some sign, ANY sign, that the birth was going ahead so they could do a late-night emergency rearrangement of the cover story. Well into the night, up until the very last minute they could put off printing the magazine, I scoured news pages and trawled message boards and tapped various searches into Google, like a montage in a spy film.

But the rest of my work? The work I did all day, every evening, and also during the Jolie-watch spy montage? Awful. It was just various types of data entry, and there was so much of it. The same day I was doing Jolie-watch, I was told twice “Oh I can’t wait until you’re settled so I can give you the rest of your workload!”. I was terrified. What was my full workload? I was approaching 11 hour workdays, with 3 hours of homework, and a 90 minute commute to and from home: meanwhile, I hadn’t written a single word. I was hired to provide sassy online content, but all I’d done was upload photo galleries, format competition pages and generate web traffic reports. Things I did not really know how to do.

On July 4, 2008—my fourth day—I finally got to write something. That is to say, I defiantly put off the rest of my work and just did it anyway. It was a blog post for the website, about Angelina Jolie—after Jolie-watch I felt so close to her, you know? After I wrote it, I asked PMS McStomperson who had final authority on what gets posted to the website. Turns out it was me. So…I posted it. Nobody asked to check it. Nobody proofread it. Nobody even read it out of interest. It was twenty-four hours before I finally cracked and asked a senior editor to read it, because I wanted to make sure my writing was up to scratch. She said “Oh, don’t worry, you couldn’t be as bad as Tania.” Apparently Tania was a reporter—meaning she was hired full time to write in the print medium—who couldn’t write. “Don’t get me wrong, she was good at her job,” said the senior editor, “Except for her writing. My god, she was a shit writer. Couldn’t form a sentence to save her life. All her work had to be re-done!”

To recap: I had been recommended for a job by someone who knew nothing about the job, selected for my writing skills for a role that didn’t actually require writing in an office where writing ability is not a priority. On top of this I was commuting three hours a day, my coworkers were all mean, and my lunches were inedible because they were almost always soaked with tears.

On July 5, 2008, at 5pm—my fifth day—I drove straight from the office back to Canberra for the weekend to try to figure out what horrible, horrible mistake I’d made with my life.

On July 6, 2008, I spent most of the day on the phone with bosses from the radio station, trying to find any way I could get any kind of job back.

On July 8, 2008—what should have been my sixth day—I called in sick at the magazine.

On July 11, 2008, I packed everything I could fit into my Corolla, choked out a tearful goodbye to John, and drove back to Canberra. I salvaged a job at the radio station—the same night-time panelling role I was given when I was fired from breakfast—and I salvaged my old room back at the Ponderosa. Well, almost: our fourth housemate had measured his bedroom and my bedroom after I moved out and discovered that my room was 4.5 centimetres wider, and in the eleven days I was gone, switched rooms.

So everything was back to normal, except that everything was a tiny bit worse than when I’d left. I was so grateful to have made a clean escape, and to have had everyone in Canberra—friends, housemates, employers—all rally to get me back in one pice, but at the same time I felt utterly broken, with no idea what to do with my life. I’d never gotten it so wrong before. How would I ever know what to do next?