So, I’d quit my job at the toy store, to take up part time work under my friend Rebecca, who’d become the manager of a video games store at Westfield Chermside. It was only part time work, so I was suddenly on a lot less money. Combine that with the fact that Chermside was practically next door to Taigum, it made sense to move back home. Again.

Unfortunately, the forty-three house moves I’d experienced up until that point had given me a warped view of what it meant to rent a place: I assumed the capricious abandonment of one dwelling for another was completely normal and no big deal. So I called my real estate agent, without a hint of shame or comprehension of the consequences, and flatly informed her that I could not afford to pay rent anymore and would be moving out, but thanks anyway and I’d let her know when it was empty. Oddly, she got quite sharp with me. I mean, here I was giving her a courtesy call and she was giving me attitude? Like, calm down, lady. I’m just saying I need you to cancel my lease nine months early because I’m poor now. Why so snappish? But she refused to listen? She just kept talking about obligations and “breach of contract” and “letting fees” and “cleaning fees” and “paying rent until a new tenant is found” and I found the whole thing stupid because if I could afford any of those things then I’d be able to afford the rent, wouldn’t I? DUH. And anyway, it’s not like I signed a CONTRACT; just a lease, and a lease isn’t…

LOOK. Was closing the bank account the rent came out of and clearing all my stuff out of the flat in secret the mature thing to do? No. Did it work? Technically. Do I regret it? Yes. Do I wonder how I’ve ever been approved for any subsequent rental properties, since that undoubtedly left a black mark against my name? Every single time since.

And so I was back, living with mum, in Taigum. A suburb not on a train line; serviced only by buses. And this was during a time in Brisbane’s public transport history where half-hour buses were considered “frequent”. The isolation, especially in contrast to Petrie Terrace, where I’d been able to see the city right in front of my kitchen window, was well and truly felt.

Remember what I wrote as the caption to this photo two weeks ago? Whatever it was, just pretend it says that same thing here.

So what to do when you’re stuck out in the wops with nothing to pass the time? You find the nearest thing and start doing that, apparently: it’s what my mum did when she walked into the AMF in Kedron and joined a ten-pin bowling league. And it’s what I did when I…copied my mum and did the exact same thing.

Like most of her other hobbies, mum took to ten-pin bowling with an ardent fervour that was short-lived, but intense. At first she was useless at it, but her learning curve was steep: soon there was an actual pile of “Player of the Week” certificates on the table. She started learning how to do the “spin” delivery. She bought her own ball. She had a special glove.

Like most of my other hobbies, I took to ten-pin bowling with an imaginary fervour that far, far outweighed my actual level of talent. I had no certificates. I tried the “spin” delivery once but it hurt my thumb too much so I stopped trying. I wanted my own bowling ball (it was going to be transparent, but with a skull in it, just like Janeane Garofalo’s in Mystery Men), but could never afford it. I didn’t have a glove.

But I did have a nice league team-mate. He was in his forties and had the ugliest mullet you had ever seen, but he was a very friendly person. Were my life some kind of weird romantic comedy, he and my mum would have had a meet-cute and started dating. She would have fixed up his hair, and he would have given her something to do other than try to find wall space to fit all those fucking bowling certificates.

Oh wait, they did do that. They did exactly that. That’s how my mother met Mike. Here’s how I assume it went down:

(Mum’s always on at me about who would play her if this blog became a movie. I guess we now know it would be Lorna Luft?)

I, on the other hand, continued to meet no one. But at least work was fun. The video games store job was the perfect antidote to the toy store job, and continued my winning streak of ridiculously fun-sounding jobs. I can really only think of three complaints I had about working at Game R Us. Firstly, Westfield Chermside is so big, so sprawling, and so oddly shaped that it is impossible to find one’s way around. On more than one occasion I was late coming back from my break because I got lost. LOST. I couldn’t find the store at which I was an employee; the store I’d left not fifteen minutes earlier. 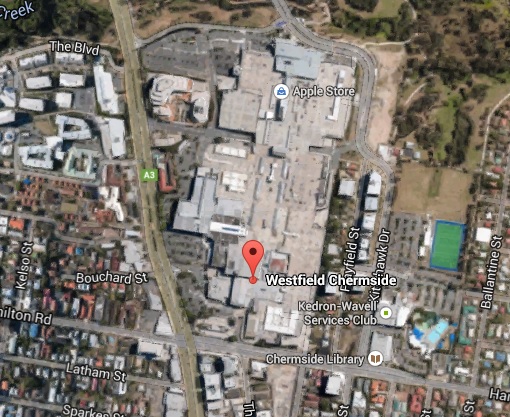 CALM DOWN, WESTFIELD. This is far too much shopping centre. This is more than just Chermside, this is Chermwhole. THE ENTIRETY OF CHERM IS WESTFIELD NOW

My second complaint would be the one other employee, Carl; an American, formerly of the U.S. Army, who made everything—EVERYTHING—a competition. If you had a black cat, he had a blacker one, etc. Carl also held eye contact a little too long, and talked about the army a little too much. I’m not saying Carl had a human skull in a box under his bed, but he definitely had the box.

My third and final complaint about Games R Us would be the way it went into administration two months after I started working there, and closed down completely one month after that.