In late 1998 we left the breezy, salty outskirts of Brisbane’s Redlands shire and headed inward to Salisbury: pronounced SOULS-bree or SAWLS-bree, depending on how fancy you feel, but never ever SALLIS-berry. If you’ve been saying it like that there’s something wrong with you.

In hindsight, that’s an excessive number of carports/driveways for a single house.

Coincidentally, while Weldon Street happened to be very similar to my family name, which meant no end of jokes about how the street was named after us; it turns out that many streets in Salisbury were actually named after members of my family: from my dad’s side, who helped establish the suburb way back when. Fairlie Terrace is a large street in Salisbury; Fairlie is my grandma’s maiden name (no, not that one; the other one. The nice one). And we lived just off Lillian Avenue: Lillian was my (great?) great (great?) aunt (I’m unsure on the correct number of greats). Luckily, I wouldn’t learn this for another six years, so everyone around me was spared me being a total insufferable nonce about it.

There were two excellent things about the house in Ainsworth Street. The first being the giant jacaranda tree that grew in the front yard. With its explosion of purple blooms that made a filthy mess of the footpath, hanging out on the front verandah was a feast for the eyes. And even when it wasn’t in bloom, it is still a beautiful big tree.

The second excellent thing was that Robby, who had lived with us in Cairns, Darwin, Moranbah and Crows Nest, now lived around the corner, on Lillian Avenue (did I mention it’s named after a relative of mine? I’m pretty important around here). Specifically, Robby lived so tightly around the nearest corner that our back fence was her side fence, and there was even a gate giving us access to each other’s backyards. We basically operated as one giant house that just happened to have an atrium in the middle of it. So while Natasha and Casey had both moved out and moved on with their own lives after we left Weldon Street, our unconventional extended family unit maintained its multitude of dysfunctional arms.

I had my 18th birthday in Robby’s backyard, which was the very first night I ever got drunk. Having extensively documented my capacity to be a goody-two-shoes, nobody should be surprised by this. Yes, it wasn’t until December 20, 1998 that I had more than one single mouthful of alcohol. As you can see, I took to it almost immediately. 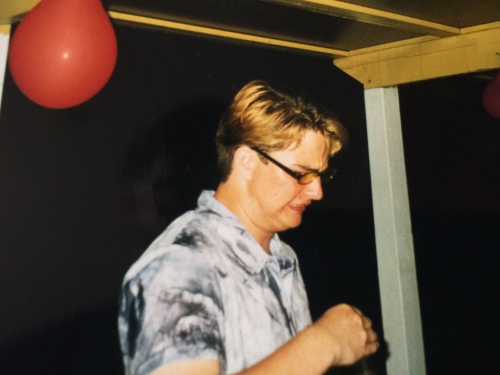 This isn’t all my fault: My friends and family didn’t ease me into this “drinking” malarkey: Oh no, I was doing shots of Sambuca and Southern Comfort right off the bat. It was years before I would learn that alcohol needn’t taste like licking the back of a fridge.

Being my first time, I got drunk pretty quickly. But I didn’t get drunk as quickly as my mother. 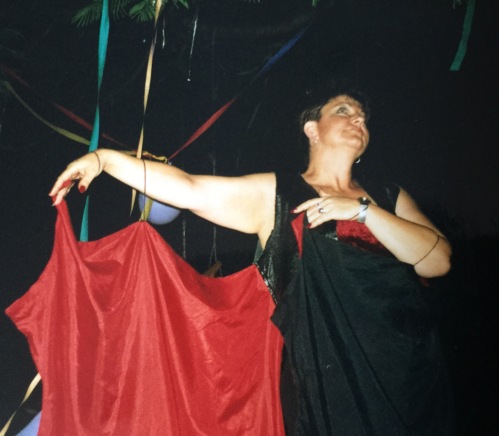 The theme of the party was to come as something starting with my initials: C, B or W. Mum combined two and came as a “bitch with wings”. I’m not making this up.

I can only assume the relief at having gotten me all the way to 18 without either of us dying, by shark or toaster or boat or cactus garden or handsy babysitter or snake or Tina Arena cassingle, had given her cause to celebrate.

This is the most my mother has EVER posed for photos. This in itself is proof she was completely soused. PS: She doesn’t have three arms, that third arm is Robby’s, who is even better at avoiding having her picture taken than mum.

And celebrate she did. My mother is not a frequent drinker. In fact, she drinks so infrequently that it’s easier to just round it down and call her a teetotaller. And she’s a lightweight, so when she does drink the resulting spectacle is as surprising as it is shortlived.

Ladies and gentlemen: My mother. Looking classy as shit with her cigarette and unopened bottle of what looks from here to be a West Coast Cooler. Oy. Also in this photograph: Aimée, looking just thrilled at her choice of surrogate mother-figure.

She didn’t even get to cheer me on when Paul, who was also living in Brisbane by this stage and had come to the party, gave me a birthday kiss on Robby’s trampoline. (I’d actually forgotten about this until Paul reminded me in a conversation we had on Facebook a couple of weeks ago.) And yes, at this stage, on December 20, 1998, I am still five years from realising I’m gay, because I am. a fucking. idiot.

We did not rent the house on Ainsworth Street through a real estate agent, we rented it privately. I don’t normally remember the details of how we rented houses and who we rented them from, but I specifically remember this was a private rental because there were some specific stipulations in the lease agreement.

For a start, the covered carport was where the landlord kept his Winnebago. We didn’t have to do anything with it, it was just where it lived. Secondly, there was a downstairs room, separate to the rest of the house, which was always locked: it was a storage room, and it was packed to the gills with old spare furniture of his. The room was off limits to us. Both of these were fairly innocuous requests: there was plenty of driveway to fit mum’s car as well, and the remainder of the house was a perfect size for us.

You already know where this is going, right?

If you have already assumed that the landlord was a massive creeper who would sneak into either the Winnebago or the downstairs room without any notice so he could spy on us: congratulations, you are smarter than we were. Where the hell were you seventeen years ago?

But did you also guess that he would let himself into the house so he could do things in mum’s bedroom?

We discovered that last part because mum had a lightweight cotton bedspread that she pulled taut across the bed when she made it of a morning. One afternoon we came home after all being out all day, and she discovered the tautness of her bedspread had been compromised by something shaped like an old man’s butt.

I don’t even want to imagine what he got up to in there, so whenever I think of it I just picture this.

We never really got to the, er…bottom…of exactly what this guy’s damage was. Nor did we really dig too deep to find out what he did when we weren’t in the house (or worse still, when we were). Once we discovered he was a major creeper, we pretty much moved immediately.

It’s one of the silver linings of a private rental: If your landlord turns out to be a the-call-is-coming-from-inside-the-house kind of guy, you can pretty much just abscond without guilt.