A tiny house sits halfway up a tiny hill in a tiny town 35 minutes north of Manhattan. It’s definitely a town, because the sign on the main street says the word “town” seventy-five times. 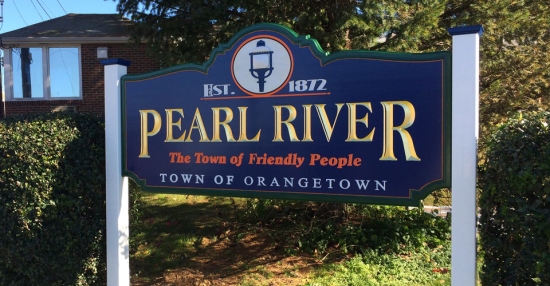 When you’re alone and life is making you lonely you can always go: PEARL RIVER TOWN OF FRIENDLY PEOPLE TOWN OF ORANGETOWN

Then again, I come from a state that has a city called Townsville, so who am I to judge?

In a beautiful piece of town history that sounds like a B-plot from The Vicar of Dibley, Pearl River is not the town’s original name—as evidenced by the distinct lack of any river, stream, creek, tributary or canal with the name “Pearl River” nearby. (Then again, I lived in a town called Tin Can Bay, and the bay was always pristine and free of non-perishables, so who am I to judge?) In its early days, the town had actually been called Muddy Creek. But who wants to visit a place called Muddy Creek?

Oh, what could have been (and yes, this does represent the very best of my Photoshop skills. I’m sorry)

And so they set about revamping the community’s PR with a swift name change. Keep in mind, this was hundreds of years before anyone even had a business Instagram account, so for the townspeople to be aware of #branding way back then is some tremendous forward thinking.

So. The tiny house on the tiny hill in the tiny town (of Pearl River formerly Muddy Creek Town of Friendly People Town of Orangetown) is where I first moved when I came to America on January 21st, 2017. 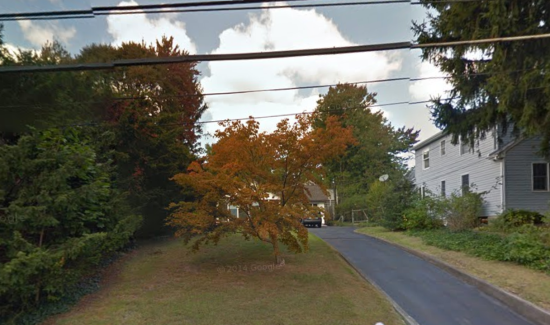 That tree is the perfect paparazzi foil

The tiny house is occupied by Tracey, her two kids Dance & Hockey (to maintain the privacy of the underage I am substituting their names for their main hobbies), and the family’s two dogs Big-Eyed Horse and Needy Petulance (the dogs are also underage, so…). And, for three months earlier this year, the house was also occupied by me.

How do four people, one normal-sized dog and one walrus-sized dog fit into a diminutive space? Tessellation, mostly. Oh, and by me living in the basement.

Yes, I got to serve neckbeard internet troll fantasy realness by being a man in his thirties living in the basement of a family home.

If you ask Tracey about my basement digs, she’ll immediately start apologising for it. She’ll say it’s too dark, it’s not pretty enough, there isn’t enough nice furniture, it’s too loud, it’s too bright, it’s too quiet, it’s too small, the wall is lumpy, it’s a cavern, a dungeon, a prison, a cellar. She started apologising for my living arrangements back in January and she only just ran out of things to apologise for yesterday.  But honestly, it was a wonderful set up. I had a bed and a couch (okay the bed was also the couch, but I like my furniture like I like my men: versatile), a plush rug, and the family’s spare basement TV. And can I point out? The “spare” “basement” TV is the biggest TV I have ever had the good fortune to sit in front of. The TV is so big I got sunburnt watching Mad Max. The TV is so big I got vertigo playing Uncharted on the PlayStation. The TV is so big my eyes have indeed gone square, just like my mum always threatened they would, but they’re now also the size of iPads.

Regardless, it was in this small underground cinema that I first started navigating life as a resident of New York. The state, if not yet the city.

Step One: Doing that thing all Australians do when they get to the northern hemisphere where they photograph themselves in a scarf and beanie in January with that look of surprise and delight, like “LOOK I’M WEARING A SCARF AND BEANIE IN JANUARY!” (I didn’t say it was inventive, cool or insightful, I just said it’s a thing we do.)

Turns out “starting a new life” is harder than expected. Not because of jetlag, or culture shock, or loneliness, or fear of the unknown, or even having to find a whole new favourite brand of laundry detergent. It’s just real hard to open a bank account.

See, like most Australian kids, I got my first bank account in my first grade of school, and I didn’t even have to do anything. It was 1986, and a very boring man from the Commonwealth Bank came to our class to give us all “Dollarmite Accounts”.

And that was it. We all had bank accounts. For the rest of our lives, opening any other account (or really doing any form of official business anywhere) was a piece of cake because we all had official identities in the finance world thanks to these furry squid-looking bastards.

To open a bank account in the United States I needed a Social Security card, three forms of identification, two different documents that prove my address, a letter from my employer, a lock of hair from an immediate family member, exactly 15 ounces of duck a l’orange, a utility bill, the Orb of Thesulah, the answer to the riddle “what walks on four legs in the morning, two legs at noon and three legs in the evening?” and at least five dollars.

It took nearly three months, but eventually I amassed enough paperwork to open my first American bank account. Then, and only then, could I finally I start living my life as an official New York resident.

Except then I learnt about “credit ratings”.