The fugacious, corporate-owned shell for the sad and unstable didn’t turn out to be as bad as I had imagined. At best, it was a real home: the backyard was a regular backyard, the house was furnished, and it even had a television. At its worst, it was still a bit shit: For a start, the television was was about the size of a toaster and was bolted to the ceiling, so even that silver lining was dubious. The house itself was a very matter-of-fact construction: a stark metal fence and a stark concrete driveway bordering a stark brick box. 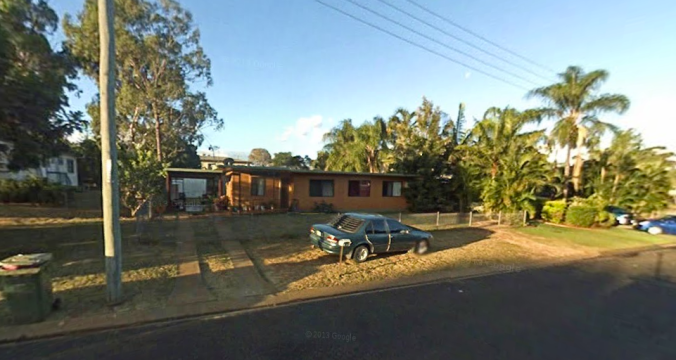 Though, I will say this: that capsicum-dip brick colour is SASSY.

It was strictly utilitarian; it felt like emergency short-term housing. The memories of all the sad/troubled/unsettled families before us who had also had needed emergency, short-term accommodation had soaked into the walls. It was like the house was always quietly whispering to you: things aren’t going great for you right now.

So obviously Christmas 1994 was a real hoot.

(I snark, but the truth is I have always loved Christmas with all my heart. Only a small contingent of people who get into Christmas as much as I do. No matter where my life is at at any given time, Christmas provides an impenetrable shield of happiness that lifts my spirits and makes me completely carefree. 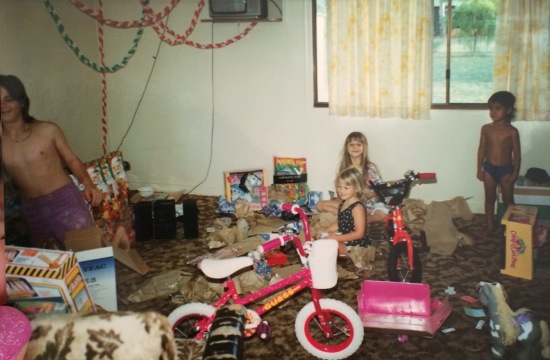 Christmas Day kids: me, Robby’s daughter Taren, Lauren, and Tommy. Note the tiny ceiling TV, the pitiful Christmas decorations dangling from nothing in particular, and the long-haired, purple-shorts-and-a-necklace-wearing twink who is still, astonishingly, nine years away from figuring out he’s gay. Note also the answer to an oft-asked question: No, the (actual) carpet does not match the (actual) drapes.

I don’t know how or why this is, but it’s always been the case. So even though Christmas 1994 was spent in a spartan house with all the charm of a prison cell, and even though Dale got ripsnortingly drunk on Christmas Eve and spent most of Christmas Day passed out on the floor in his jocks with a half-eaten tube of luncheon meat clasped to his chest, it still felt, mostly, like a good Christmas.) 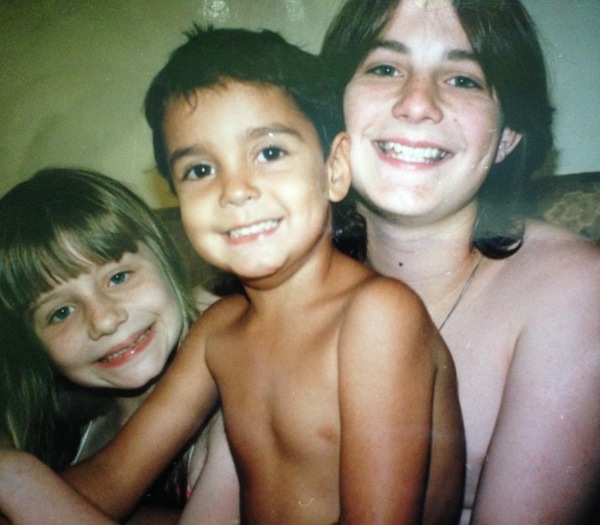 But let’s go back to the week leading up to Christmas. Having been 14 for three whole days, I was full of new found maturity and sense of self. I jest: like any normal 14 year old I was almost entirely out of my mind. But I did feel a need to be more of a grown-up, and contribute more to the family. To that end, I was determined that, for the first time, I would buy my mum a Christmas present. Come hell or high water, she would have something to unwrap underneath the tree.

That was, of course, if we ended up having a tree. It was December 23 and we were essentially squatting: nothing was guaranteed.

I had managed to amass the grand fortune of six dollars, and this was my budget for mum’s present. I can’t fully articulate what an accomplishment it was to have somehow pulled six dollars together. I strutted about like I was Jordan Belfort. I was the Wolf of Grout Street.

I took my fortune and headed off to Moranbah Fair, Moranbah’s only shopping centre. I’m not sure “centre” is the right word, as “centre” implies there’s something for it to be the centre of, and there wasn’t really enough of Moranbah or its fair to draw distinction between the the middle and the not-middle. Still, what it lacked in size it made up for in being easy for me to bargain-hunt from top to bottom in one hit.

And hunt I did. I cased every shop in the joint: Target Country, the newsagent, the two-dollar shop (I believe it was Silly Solly’s?), the rando homewares shop (Copperart?), the jeweller (Kleins?), the chemist: I even did the supermarket and the butcher, just in case. See, I wasn’t just looking for a present that cost up to six dollars, I was looking for a present that cost exactly six dollars. I had six dollars to spend. Not a cent less. Why had I set this restriction on myself? I have no idea, but I have at least been consistent in this compulsive need to spend every cent I own regardless of need or want for the past twenty years.

I finally struck gold in the music shop (Sanity? Or was it Brashs?): Cassette singles were $5.99. BINGO. Now it was simply a matter of buying the right cassingle, which shouldn’t be too hard: Mum loves music of all kinds. Watching Rage on the ABC was a weekend staple from a very young age. That said, she doesn’t enjoy music that is too slow, and she doesn’t enjoy music that’s too poppy. She prefers it upbeat with a rock edge.

Of these ten songs, nine are suitable for my mum. The Cranberries, Silverchair, Bon Jovi and the Offspring all meet the rock requirements, Sheryl Crow, Tom Jones and Gloria Estefan all meet the tempo requirements, and 20 Fingers and Mariah Carey’s songs had a novelty element that would bring a smile to her face.

GUESS WHICH OF THOSE TEN WERE AVAILABLE AT MORANBAH FAIR’S SANITY (or was it Brashs?) THAT DAY?

But it was six dollars. And I had six dollars. And so it had to be bought, because that was the rule I had set in my quest for maturity. And besides: it’s the thought that counts, right? And I was thinking so hard about how terrific I was going to look when I put a present for mum under the tree. I would be the favourite child.

On Christmas morning, mum unwrapped her tiny, cassette-shaped box, festooned with so much ribbon it was hard to see where the box ended or began (Mum and Robby had decided on gift-wrapping theme that year: brown paper with elaborate ribbon decorations: I went all out). She finally rescued Tina Arena’s pouty face from under the lashings of ribbon, and superbly acted like a cassingle of a song she didn’t particularly care for was all she’d ever wanted.

It’s a little thing I, in retrospect, like to call “setting the bar low”, because comparatively? Every gift I’ve given her since has been a bollocking triumph.