The haze is still present at this part of my brain storage, but I do have a clearer memory of living here. 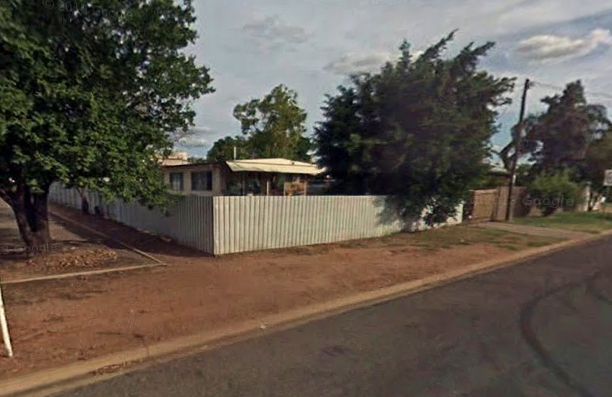 That fence is the only thing keeping the dirt moat from taking over the whole house.

It was in this pokey, fibro house that I learnt the dangers of electricity, and how much of a no-no it is to stick a breadknife into a toaster.

First, some history: do you remember back when toasters did not have a multitude of buttons? If you don’t remember, feel free to gasp in horror; it was indeed a primitive time. Phones still hard cords, microwaves still had dials, and toasters were still just metal cubes of barely converted electricity. 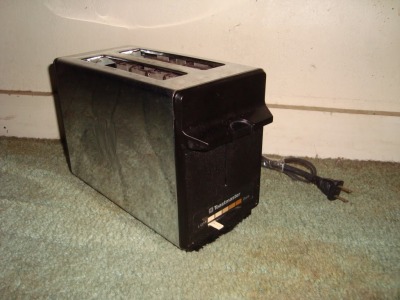 CONSPIRACY THEORY: They’ve already perfected A.I. technology. Each toaster is implanted with it. That’s why each toaster cooks bread however the fuck it wants.

You had to use the same function to toast bread AND muffins AND crumpets like a common fucking savage. There was no “cancel” button, no “just a little more” button, and the levers were NOT built to be lifted so you could get easily get see/reach the finished product. Nope. You put the bread in the slot, pushed the lever down, and hoped against hope that what popped up again was toast. Occasionally it was toast. Other times it was charred blackness. Sometimes it was warm bread. One time it was a mouse (that’s how I learnt the importance of cleaning out the crumbs).

But. Most of the time? Nothing came up at all.

It is safe to assume that the insides of toasters in those days were filled with barbed wire, or some kind of special gluten-specific magnet. For as long as I’d been making toast—which, being nine years old, hadn’t been all that long—toasters were trying their hardest to not let me have any.

So what did you do when your bread got jammed? Well, you were probably already holding a knife in your hand, ready to spread something delicious on your toast: so you stuck that knife down the guts of the toaster and levered your bread out. For as long as I’d been making toast—which, again, nine years old—I’d also been stabbing toasters with my knife and angrily flicking my breakfast across the room.

Until that one fateful day when mum saw me do it, and threw me off my game forever. She screamed in terror and turned into a blur as she leapt across the room (a significant feat in itself, as she was substantially pregnant at this stage, and had only recently recovered from dengue fever). I’m not sure what happened exactly, except that when the dust settled, I had been picked up by mum, and was no longer holding the knife or the toaster or the toast. OH GOD DAMN IT: She had done that mum-Vishnu thing where she magically grew extra hands in a moment of chaos: she’d picked me up with one hand, grabbed the knife with the other, knocked the toaster out of the way with another (but not before retrieving the toast with yet another), and probably safely buttered the toast and added Vegemite and given it to my sister with a couple of others.

“Christopher, you must never, EVER put metal into a toaster!” she gasped between worried breaths.
“But that’s how I ALWAYS get toast out!” said my mouth, ignoring my brain’s message to SHUT UP SHUT UP.

Afraid that I would immediately return to going full Julius Caesar on my toast the minute her back was turned, mum made a tactical manoeuvre. She went dark.

“Do you know what happens when people get electrocuted?” she asked quietly. Of course I had, I’d seen TV! They leap off the ground and electricity zaps all over them and their skeletons are visible and little bits of lightning shoot out and afterwards their hair is all sticky-outy and smoke comes off them.

“No, that’s just in cartoons. Real electrocution doesn’t look like that at all. The real thing is much nastier.”
“What does it look like?”
“I don’t know if I should describe it.”
“Why?”
“It’s terrible.”
“Why?”
“I don’t want to give you nightmares.” The trap was set.
“TELL ME!”

What followed was the most gruesome description of death I’d ever heard. Eyeballs melting, skin bubbling, fingers exploding, hair catching fire, organs turning to goo, clothes fusing to skin bubbles, teeth cracking, blood evaporating, pooing in your pants, and so on. I’m surprised I didn’t barf on the spot.

“…and there’s no zapping sound like on TV, it’s totally silent. Mummy wouldn’t even know it was happening until she came into the kitchen and found what was left of you.”

I was boxed in. She had combined my two most annoying childhood traits: unflinching curiosity and chronic fear of physical discomfort, and as a result there was no way I was going to put anything into a toaster ever again.

Not even a wooden implement.

Not even a rubber implement.

It was at least a year before I had anything other than cereal for breakfast.