Triple question marks again. But this one isn’t my memory’s fault: We were only in this next place for two days. I don’t think we ever learnt what the address even was, let alone be able to remember it twenty-five years later.

As the whole point of this project is “sixty stories from sixty addresses”, you already know we didn’t stay in ??? Street in Edmonton. Even though the house was practically a mansion, we had Robby living with us being both an excellent person and a live-in nanny, and the local school didn’t entirely suck; we didn’t stay. Why?

The answer is: Dale. Every inexplicable decision from now until about 1998 can be answered thusly: Dale.

I know now—but did not know at the time—that Dale was a violent, controlling drunk. Well, I knew the drunk part: that’s much harder to hide, but I wasn’t aware of the other, more despicable depths of his nature. It was hidden from me alarmingly well, and for the first few years he was never aggressive towards me in any way. In fact, I felt very close to Dale for a time. This in itself makes the violence he inflicted elsewhere all the more insidious. I won’t be writing too much on the details, as those stories are my mother’s to tell, not mine; but she has, for the purposes of this blog, given me some details with permission to repeat them.

We moved north because we had no choice. We were entirely at the mercy of Dale’s whims. We’d already moved away from family in Mount Isa, and had no real ties in Cairns. He then made us financially dependent on him: Mum lost her job as the office manager of a car dealership because Dale would skulk around the premises all day, checking to see if she was talking to any “strange men”. Mum was given an ultimatum: “he goes or you go”, and if you don’t understand why that’s not technically a choice then you need to read some literature on domestic violence situations. She quietly resigned, and another tie to the outside world was severed.

With no family, no money, and no autonomy, Dale was in complete control. And we were headed north. Again, I didn’t realise how dire this situation was; to me it was just another cross-country adventure.

Though I would soon learn it was a pretty shitty adventure.

So, we leave Edmonton. Robby did not come with us: I don’t know why specifically, but one can only assume she heard the plan, thought about it for 0.000002 seconds, went “yeah, nah” and bounced the fuck outta there. Because she is smart. The four of us that remained clambered into Dale’s Nissan Navara—which didn’t have any backseats, can I just point out: only a “cavity” covered in blankets my sister and I perched uncomfortably on (I believe it’s called a “king cab”?)—and headed north, to the bewildering wilderness of Cape York Peninsula.

See that bit between the door and the trailer? THAT is where Lauren and I perched for the entire drive. Also, the missing front wheel? SPOILER. Keep reading.

Cape York. Land of long, unbending, unsealed roads. Low, dense scrub as far as the eye can see, split right down the middle by a single, unbroken corrugated dirt road.

Everything about the area is ominous. Abandoned cars dot the landscape in an ominous manner. Wooden signs over rivers ominously warn of that river’s connection to an estuary, and the subsequent ominous danger of crocodiles. Anthills loom so ominously tall you can use them as cover to take a shit in complete—if ominous—privacy (THIS IS IMPORTANT, because if you take cover behind a tiny little shrub instead, your mother may well take a photo of you, mid-poop, for laughs). 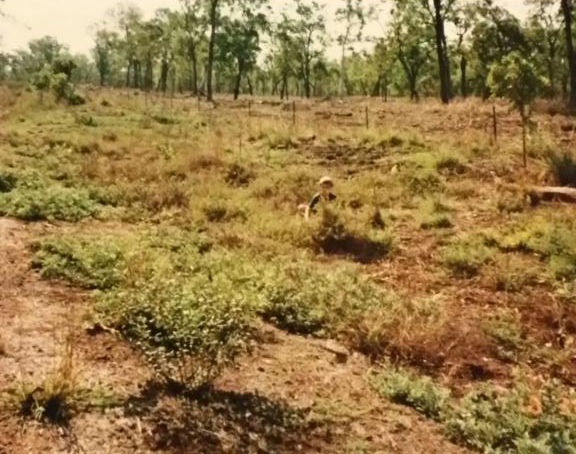 Yes, I learnt this lesson the hard way.

Weipa, which is where we ended up (and am counting as an address, because by the time we got there it was the first house we’d been inside of in a week), was actually our third stop. Our first stop was a solitary roadhouse by the Archer river which sold a burger known as the Archer Burger. It was shockingly, devastatingly, inimitably tasty. Or maybe that’s just because I’d just spent who-knows how long wedged behind a bucket seat on a rolled up towel driving along hundreds of kilometres of corrugated dirt road, having not seen another living soul. Maybe it was like how McDonald’s tastes delicious when you’re hungover. All I know is that I’ve never had anything as delicious as that burger in my life since.

Mum just looooves photographing me with food either going in or coming out, huh?

Our second stop was in a weird hamlet called Coen. We weren’t going to stop there, we were going to drive on, but on our way out of town (where we drove past THIS creepy sight)…

…our car broke. Not broke down; just broke. The entire front axle got munted. We had to get a tow back into Coen, where we ended up staying two nights.

Oh! And the creepy backed-up-a-tree car? On the way back, we discovered it had disappeared. There was not a single trace of it. So obviously we were chuffed as fuck to spend 48 hours stranded in the area with a busted car. There’s a reason I can’t watch the movie Wrong Turn without violent sense-memory flashbacks.

Obviously, I’m here to tell the tale: we didn’t get chopped up by mountain men. We did in fact make it out of Coen almost entirely unscathed (though I would still very much like to know where the fuck that car went). Eventually we ended up in Weipa, which, almost 900 words in, is where this story was supposed to start. Sorry about that.

After the roadhouse on the Archer river and the Eli Roth-esque Coen, Weipa seemed like a thriving city. We were so happy to see paved roads. All six of them. We stopped, we stayed with some people, we looked briefly for a house in which to live, I enrolled in the local school…and two days later we left again. As before, I don’t know why any of this happened, I just know we didn’t really have a choice.

So, the people with whom we stayed: were they friends? Family members? Who were these people? I had no idea. All I know is they had a house that was probably quite big for them, but with four extra people jammed in it suddenly became tight and cramped. I know that our welcome was tenuous at best, and I know that the bathroom was always partially submerged in water. Always. A centimetre or two of water across the entire floor. It made going to the bathroom extremely uncomfortable, and taking a bath downright confusing.

I remember being mortified that there was a chance I was standing in other people’s pee (or worse), and testing the toilet to see if the water flowed out of the bowl. It did not. It came from somewhere else (or at least, leaked from a different part of the toilet). I tested the sink: it drained like it was supposed to, as did the shower. I never found out where the water came from.

Compared with what was to come next, living in this house would be the most comfortable I would feel until well until into the next year. And this was a house with so much standing water in it, you had to go outside to get away from the mosquitoes. There’s a reason I can’t watch the music video for Shania Twain’s “Don’t Be Stupid” without violent sense-memory flashbacks.