This next address, Casuarina Drive, holds the record for the shortest amount of time I ever spent in one place: ninety minutes. See, moving back in with my mum, sister, brother and horrible stepfather was great for familial bonds, but not so good for the tetchy two-bedroom apartment they were living in. So on the day I arrived back in Darwin, we were already moving house.

I actually wish I’d arrived two hours later, so I wouldn’t have seen the gorgeous, high-rise, waterfront-facing apartment they were giving up. I actually tried to bargain a deal where I would sleep on the couch in the living room, but of course the leases had already been signed. I had to live with the guilt that I had made my family give up one of the nicest properties they had ever inhabited. 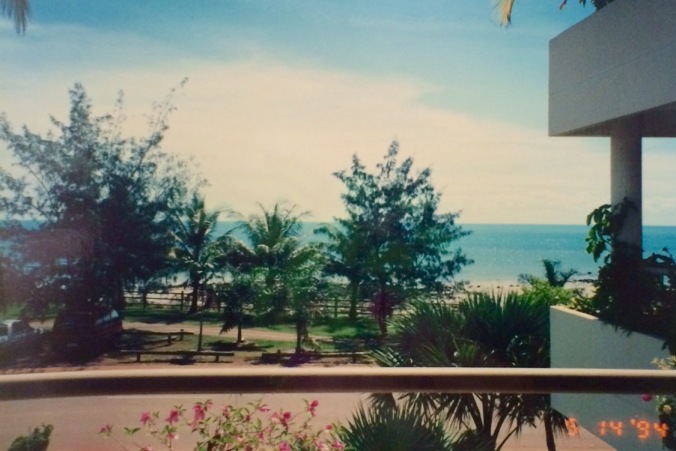 This is the view I made them give up. And, more importantly, never got to fully enjoy myself.

Instead we ended up in a much larger three bedroom apartment in Aralia Street. It was a perfectly nice apartment—in fact, as a third storey apartment big enough to house five people, it was tremendous—but it wasn’t a tiny palace overlooking the beach. 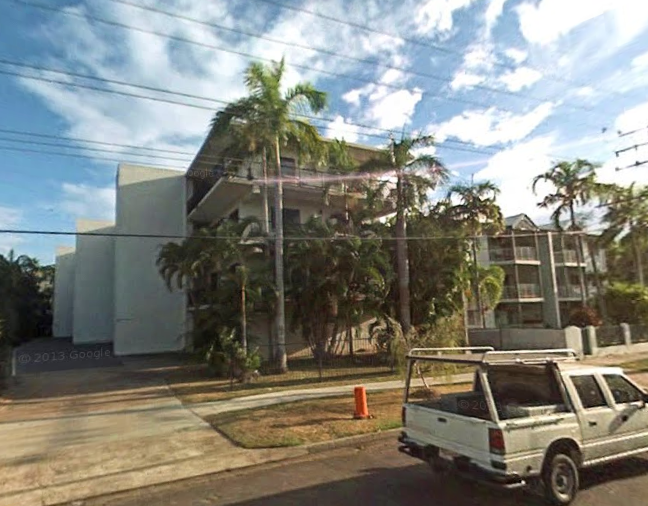 Note the modesty walls on the left hand side. (I assume they have some kind of sun-blocking application, but all I can think right now is it looked like we lived in a department store fitting room.)

My start at the school was ignominious: the principal nearly refused my enrolment because apparently I had acted “surly” and “uninterested” during my entrance interview. To be fair, I was surly and uninterested: I had just moved to my fourth postcode in 9 months, I was still wearing the guilt of being responsible for the loss of waterfront splendour at Casuarina Drive, and I was in grade nine. Grade nine. Everyone knows all grade nine kids are the worst. My mother, torn between dismay that I had behaved so churlishly in front of a school headmaster, and joy that I was finally engaging in a spot of teenage rebellion, demanded a follow-up interview. She put on her sternest face and reminded the principal of his legal duty as a shaper of young minds to provide me with an education, I offered an apology for my behaviour in a tone that was approximately 4% less surly and uninterested than the last interview, and ta-da! The next day I was a student.

Nightcliff High was fucking amazing. I don’t think I have said, or will say, that about many of the schools I attended, so it’s important to give credit where it’s due. Nightcliff High is my second favourite school out of a total of 22, so I know of which I speak. (My first favourite is about a year away yet.)

Little-known fact: high schools in Darwin operated very similarly to American high schools when I was there. At least, what we saw of American high schools on TV. There was no uniform, the first class of the day was called “homeroom”, classes were numbered (English 1.01, Biology 2.01, etc.) and the classrooms were contained in large, centralised buildings with air conditioning; not the sweaty, open-air verandah-and-louvre clusters that abound in Queensland high schools. I think that’s why I liked Darwin high schools; it made me feel like I had something in common with the characters on Beverly Hills, 90210. 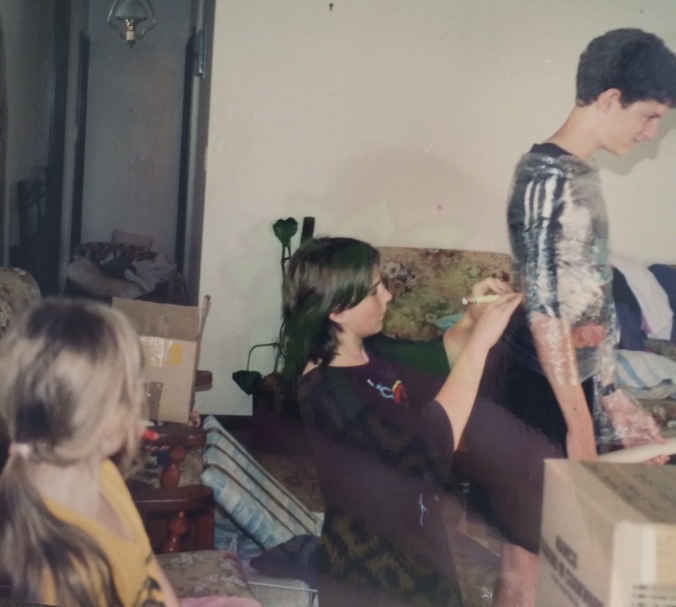 I’m pretty sure this was a one off. By the look of the background, we were packing? THERE’S A SURPRISE. I think I was hoping to mail Brendan to myself, because making friends was a rarity. Also pictured: my amazing hair, and my sister, coming to the conclusion that I’m an idiot.

I’ve since learned that Nightcliff High School is now Nightcliff Middle School. Apparently dwindling student numbers caused the change in the late 2000s. Also it now has a uniform. Whatever the changes, I hope it’s as excellent now as it was in 1994.

There was also my homeroom and biology teacher, whose name I am ashamed to have forgotten. He was super young for a teacher; not Doogie Howser young, but still pretty fresh. He was the only teacher to openly acknowledge how toothless school anti-bullying policies are, and after I complained to him about being roughed up by another student, he admitted there really was nothing he could do, adding “but if it helps at all, I think he’s a total wang. Also he’s failing, so there’s that.” It did help.

There was my P.E. teacher, a hard woman who unflinchingly sported a voluptuous camel toe through her bike pants every single day. But nobody ever spoke about it, or even so much as smirked about it behind her back, because if ever there was a teacher likely to go Ms Trunchbull on a student populace, she was it.

And then there was my art teacher, Mr Glasscork (not his real name, but it did rhyme with that), a soft-spoken hippie who let the students play mix-tapes in class, but was so perpetually stoned that he didn’t notice that four of the girls in our class would make tapes in which every second song on both sides of the tape was All-4-One’s “I Swear”.

As 1994 drew to a close, the tumult of the first three quarters of the year seemed so far away. I was back in Darwin, a city I loved, back with my immediate family, at a school I was thoroughly enjoying. Life had finally levelled out.

So it will come as no surprise to learn that we had moved back to Queensland by Christmas.