With Dale completely de-fanged, Mum took another step toward freedom by moving us out from underneath his shitheadery and into a place of our own. He wouldn’t follow us this time.

We moved into yet another unconventional structure: Once an old Queenslander, a temporary wall had been erected right up the middle of it, turning it into an unofficial duplex. As Queenslanders aren’t built to be split up the guts, it made for an odd house shape: my bedroom, which had no windows, was only accessible through my sister’s bedroom. My bedroom also had a door that led to the kitchen via an unlit hallway that doubled as a storage cupboard—part of the hallway of the original house. The verandah that wrapped around the house—a standard feature of this style of house—had had walls built around the verandah railings, closing them in and giving us a giant, L-shaped sleepout. 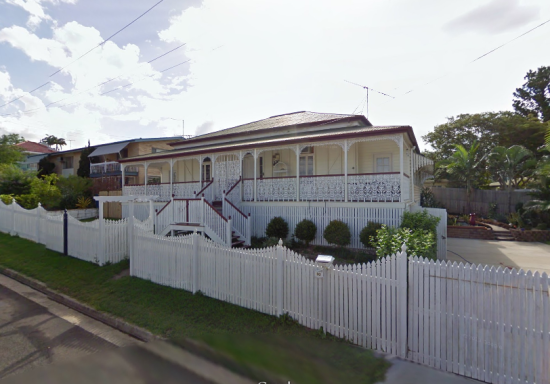 As you can QUITE CLEARLY see, this house is no longer a makeshift duplex. It has been restored to some level of former glory that we never saw when we lived there. They rebuilt those front stairs, turned the front verandah back into a verandah, and painted EVERYTHING. For reference: We lived on the right hand side: our front door was actually half way up that side wall.

I am a little taken aback at how fancy our old, weirdo half-house looks now. Luckily, this story has very little to do with the house itself, so we can forget about the loss of what could have been and move forward. Forward to the story of a very important adolescent first.

When I was fifteen, I was very much like Drew Barrymore. My voice was slightly nasal, I never knew quite what to do with my hair, and I had Never Been Kissed.

It was 1996, and I was at a high school dance. Being 1996, The Presidents of the United States of America’s third charting single “Peaches” was blasting out of the speakers in the school auditorium, and my friends and I were standing in a circle, head banging. Because that’s what you did at a school dance when “Peaches” came on.

On this particular occasion, I must have really been feeling the emotion in Chris Ballew’s voice, because I was head banging with ardent fervour. In fact, my fervour was so ardent; I didn’t even notice that I’d slowly started to rotate on the spot, so that I was no longer facing the rest of the circle. I continued to not notice when, after turning 180 degrees, I started to drift away from the group like a delicate snowflake.  What I did notice, however, was the very centre of my forehead connecting with the corner of the auditorium stage.

There was an immediate jab of pain, followed by a wave of nausea, and then more pain. I snapped upright, and the momentum of this sudden movement made me topple all the way over backwards and, as I collapsed in a heap, I slammed the back of my head into the floor also.

My friends couldn’t decide whether to rush to my aid or laugh at me, so they did both. Among them was one of my best friends, Kristel. As my friends helped my throbbing, vibrating form up onto the stage to lie down—something about keeping something elevated? I’m sure it was a misguided medical precaution, as I still ended up horizontal, just higher—Kristel sat over me and rested my head in her cross-legged lap. She ran her fingers through my hair, stroked my cheek, and kept asking if I was okay. Despite the red-hot pulsing ache just above my eyes, I felt so relaxed, so cared for, that I could have stayed there all night.

At this point in the story I need to give a quick splash of background. Kristel had spent the entire tenure of our friendship flirting with me, and making jokes about kissing me. These jokes completely failed to land because my horrified, prudish teflon coating kept deflecting them. The whole kissing/hormones/sex thing was a source of constant terror for me. I can’t hang an air freshener on this one: for a teenage boy I was obtuse and frigid.

Now, while I was as comfortable as a very comfortable thing (despite possible internal bleeding), Kristel was not. The weight of my (even then) oversized head was causing her legs to go numb. She asked me to get up, I said I wouldn’t. She demanded I get up, I said I couldn’t. She reasoned, she begged, she whined, she bargained – but there was no way I was leaving the comfort of the stage floor and her lap to face the throbbing, dizzying torment of verticality. Her gentle hands and innocuous conversation were the only things distracting me from the searing pain in the front, back, and ego parts of my head, so I. was. not. moving.

Finally, she decided that extreme measures had to be taken. She knew the one thing that would get me moving, and fast:

If you don’t get up in the next five seconds, I am going to kiss you.

I decided to let it happen. Either she was bluffing, or I was about to have one of those Momentous Adolescent Moments.

She wasn’t bluffing. She kissed me.

Despite everything that came after that, that kiss is one of the most perfect I’ve ever had. It is certainly, to date, the most genuine. It was soft, it was innocent, it represented nothing, but meant everything. I will remember that utterly sublime moment for as long as I live.

And by the time she had pulled her lips away from mine, I was completely in love with her.

Unfortunately, teenage love doesn’t work like that. In fact, not only was our friendship going to remain exactly as it already was, but not long afterward Kristel started dating someone. An actual boyfriend. I can’t remember his name, so in the interests of continuing the shoddy Drew/Never Been Kissed metaphor I’ll call him Barry More.

I was devastated by the development. I’d seen Disney movies. Weren’t we supposed to live happily ever after now? She confused me. She crushed me. And she kicked off what has been, to date, a lifelong habit of falling for people who don’t fall back. (Okay, granted, that says more about me than it does about Kristel.)

But hey, we were fifteen years old. Not only was I pretty resilient, I also had the attention span of—well, a fifteen year old. So I got over it pretty quickly. Kristel and I were back to being friends within, oh I don’t know, nine minutes or so.

Besides, Barry More was a cool guy. He wore a leather jacket, and had the thickest, shiniest hair I had ever seen on a dude. It was like an entire shampoo commercial was sitting on his head at all times. Sometimes the three of us even hung out together. Not often, because he didn’t go to Rocky High like Kristel and I did. But we hung out on weekends often enough that, despite the threat of a teen drama-esque love triangle developing, we were all comfortable with each other.

It was during one of these weekend times, hanging out at Kristel’s house, that the topic of her and I kissing came up. Barry More knew that before they had started dating, Kristel had kissed me, and it had been my first. Barry More joked that he had kissed Kristel, and that I had kissed Kristel: the only two people out of the three of us who hadn’t kissed were he and I. As a savage bolt of electricity that I didn’t quite understand shot through me, Barry More merely snickered at the hilarious homo joke he had just made.

Later that afternoon Barry More had to go, so we went out to Kristel’s front yard to say goodbye to him. Out of politeness, I turned and took a step away when Barry More leaned down to kiss Kristel goodbye, so that I wasn’t looking right at their PDA. I might have been at ease with the situation, but that didn’t mean I wanted great dirty teenage pashes all up in my face.

I was putting such a concerted effort into not looking or listening that I was completely unaware that they’d stopped, and that Barry More had walked up behind me. What happened next took me by complete surprise: Barry More put one hand on my shoulder, spun me around, grabbed the back of my head with his other hand and started kissing me. It was all done in one quick, fluid motion and I had no time to react, or process, or do anything except kiss back.

To summarise: the first boy I ever kissed was the first girl I’d ever kissed’s boyfriend. I mean. I guess at least I was efficient?

I’d like to say that kissing Barry More completely blitzed any feeling I had for Kristel, and opened me up to a whole new world where I could discover who I really was – but no. He found the whole notion hilarious, and I…I didn’t know how I found it. All it really did was confuse the hell out of me.

It did, however, pave the way for me to build the courage to hold hands with Paul at the cinema a few months later. Though, not that much courage: my teeth chattered with nerves as our fingers touched and, eventually, interlocked (I was in year 11! He was in year 12! Also HE WAS A BOY!), and the blood was pumping so ferociously it rang in my ears: I lost all track of the movie. I never did find out how Michelle Pfeiffer got on at that dodgy school.

I’m sure she did fiiiiiiiine. She had Coolio to help her.

Oh hey, I just remembered a way I can tie this winding story back to this address!

The point of this whole blog. Remember, idiot?

Paul and I had our first kiss—blowing Barry More’s right out of the water, by the way—as we sat on the back steps of this very house. It was actually intended to be our first and last kiss: we didn’t know what to do with our hand-holding feelings, so we’d decided to abandon them altogether and part ways. That resolve lasted exactly four hours: Cut to an eight person, all-genders game of Spin the Bottle out in the middle of the street that night, and Paul and I ended up making out for so long everyone else had to move three feet to the left, so they could re-form the circle and continue the game without us. After that, Paul and I realised that maybe we should just go ahead and date like proper teenagers.

What comes next I’ve already described: I freaked out, decided I didn’t want to be gay, and broke up with Paul in the most assholic way: telling him I was done “experimenting”. A boy-on-boy crime I paid for by staying confused and closeted until I was 23 years old.

In hindsight, this goes a long way to explaining my slapdash, stop-start approach to dating and sexuality. Kristel, Barry More, Peaches, a school dance-induced concussion, Michelle Pfeiffer, Paul, Spin the Bottle. It’s hard to decide what you want for dinner when you’re handed the ingredients for five different meals all at once.

[Editor’s Note: Holy shit, fifteen year old Christopher had better game than any future iteration of Christopher has ever had. I…I’m not sure how I feel about this?]